This evening we’ll get the minutes from the Fed’s latest meeting which will provide some insight into the central bank’s deliberations that lead to their second consecutive rate cut this year.

The meeting minutes are set for release at 7pm (UK time), however, market volatility is likely to increase beforehand when Fed Chair Jerome Powell addresses the market (4pm UK time).

In September, a divided Fed voted in favour of bringing the benchmark interest rate down a quarter point to a band of between 1.75% and 2.00%. Three officials had voted against the decision, with Kansas City Fed President Esther George and Boston Fed President Eric Rosengren calling for rates to remain unchanged from their previous level, and St. Louis Fed President James Bullard calling for a more aggressive half-point reduction.

A glance at the US dollar index (below) shows that the market is being compressed between a steepening trendline and a key area of horizontal resistance created by the September spike highs. We’re currently short EUR/USD which is partially against us but the premise behind the original trade remains valid, so too does the key resistance level that we highlighted in yesterday’s recommendation. 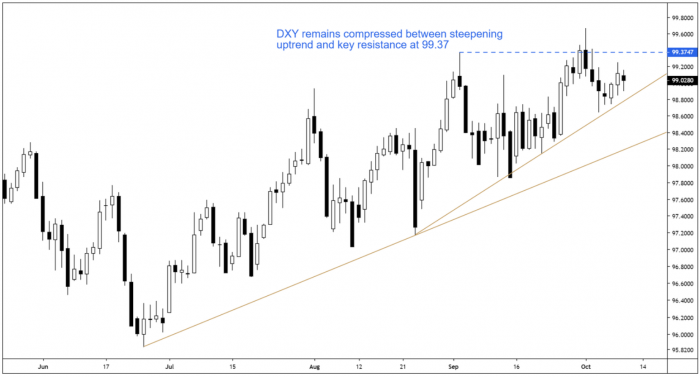