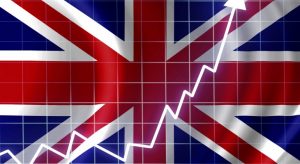 Sunak unveils “once in a generation” investment in infrastructure

The chancellor said the government will pour billions into the transport and infrastructure network to keep services running following a collapse in passenger numbers during the pandemic.

The rail network will receive more than £2bn ins subsidies next year and a further £4.8bn will be used to support buses, regional light rail, cycling and Transport for London.

Mr Sunak added the transport network will benefit from a “once in a generation” investment in infrastructure, including upgraded railways and new cycleways.

Irish cement making giant CRH is well positioned to benefit from increased infrastructure spending in the UK, EU and US.

The shares have finally through a key level of resistance on today’s Spending Review, and should they close and hols above the resistance level, they look an attractive buy. 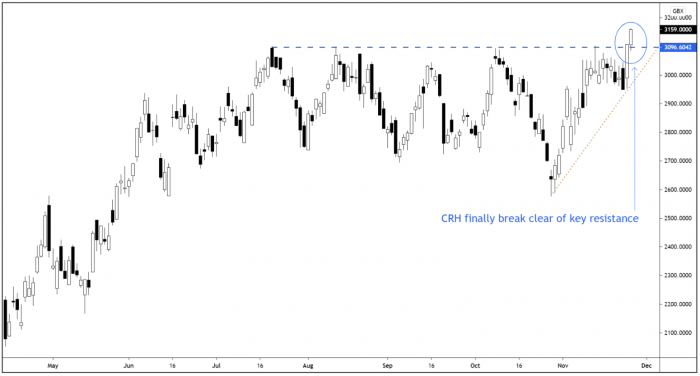 The chancellor said £4.8bn from the fund will be allocated as capital grant funding to boost development, while £2.2bn will be loaned to smaller builders.

However, estate agents hoping for an extension to the government’s stamp duty holiday were disappointed, with no mention in the chancellor’s speech of prolonging the property tax holiday, which is due to come to an end on March 31.

Whilst the homebuilding plans were a positive, failure to extend the stamp duty holiday has left housebuilders looking mixed on the day.

Barratt Developments have carved out a strong uptrend in recent weeks, and today’s price action has seen the shares start to form a bullish hammer candle. Should the shares close near intra-day highs, it would potentially setup a trend continuation trade. 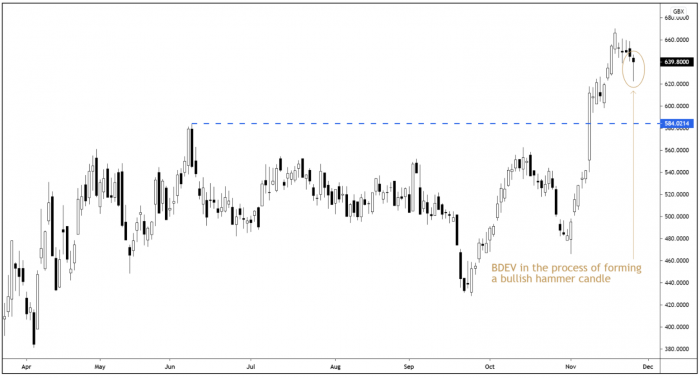 Highstreet left without any further reprieve

The business rates holiday, which has saved businesses around £11.8bn is set to end at the end of March.

However, the government said it is also “considering options for further Covid-19 related support through business rates reliefs” with plans to be set out in the New Year.

The shares have broken decisively lower during the last two sessions, and with the lack of positive news from today’s Spending Review, we could well see further downside. 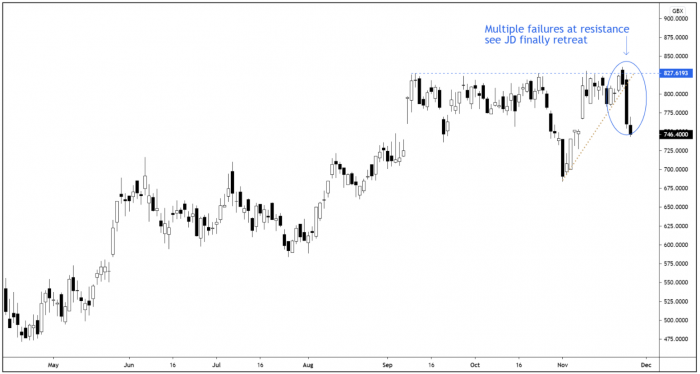